PAL Coffee Connections welcomes artist and instructor Robert Dvorak as he discusses and demos how to produce travel drawings and paintings from home (and on the road!).

Interested in Robert's class or others? Check out PAL's website for full class offerings and register today at www.pacificartleague.org.

Robert Regis Dvorak is a professional speaker, painter, and teacher. He has given over 3000 presentations promoting creative thinking, personal awareness, imagination, vision, and risk taking for corporations, associations, and schools--universities, colleges, high schools and elementary schools.

Dvorak draws on a rich background of unusual experience for his presentations including: being a member of the moon shot design team for the vehicle assembly building at Cape Canaveral, working as crew on large sailing yachts in the Greek islands, designing maternity centers in Trinidad, making experimental films--his animated films have been featured in festivals in the USA, Europe, and Australia--doing caricatures in Japanese night clubs, drawing temples in India, bicycle touring in Holland, hiking on the Great Wall of China, climbing the Great Pyramid in Egypt, and traveling in 69 countries making drawings, watercolors and speaking.

Dvorak has written and illustrated books on drawing and painting: Travel Drawing and Painting, The Practice of Drawing as Meditation, Drawing Without Fear, The Pocket Drawing Book, The Magic of Drawing, and Experiential Drawing. He has also written and illustrated Selling Art 101, Productivity at the Workstation , The Pathfinders Guide to Creative Power, and he has illustrated two guidebooks, Exploring Half Moon Bay and the San Mateo Coast and Monterey Peninsula Explorations. Two of his articles have been published by American Artist Magazines. Sketching while Traveling in Greece and Twenty Minutes to a Beautiful Figure. He has produced 23 posters of his drawings, paintings, and woodcuts; and made 22 short 16mm films. Many of Dvorak's paintings and films are in corporate and private collections. His films are in the collections of The New York Metropolitan Museum of Art, The Smithsonian Institute, The New York Museum of Modern Art, The Walker Art Institute, his paintings are in the collections of The Bank of America, Del Monte Corporation, and ICON of California and many private collections including the Vanderbuilts, the Boyds, the Kwei collection and many others. 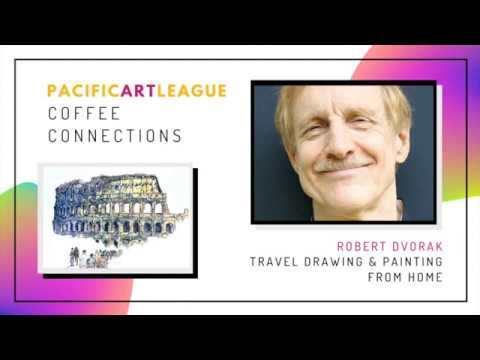 PAL Coffee Connections welcomes artist and instructor Robert Dvorak as he discusses and demos how to produce travel drawings and paintings from home (...